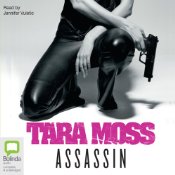 I read the first couple of Mak Vanderwall novels as they were released and then, as tends to happen with me and private investigators (especially the female ones), I hit the credibility wall. I find it hard to enjoy the stories when my overwhelming thought is that one woman simply would not survive all the things that happen in the average ‘PI in peril’ novel. In one sense it’s absurd for me to have this problem because I have no qualms swallowing many of the other tropes of crime fiction but there’s not much I can do about the way my brain works (would that I could). However, when I learned that Tara Moss was bringing Mak’s story to an end with her sixth novel in the series I thought it might be fun to check in.

A lot has happened since I last spent time with the Canadian/Australian ex-model turned forensic psychologist and private investigator but one of the things that struck me was how well Moss incorporated Mak’s back story into this one, making it easy for new (or returning) readers to orient themselves in Mak’s world. As the novel opens Mak is presumed dead by her father and other loved ones. Playing dead while living under a series of assumed names in Europe is the only way she can stay ahead of Jack Cavanagh who has issued a lucrative contract for her assassination following Mak’s concerted attempt to bring Cavanagh’s son to justice for murdering a young woman. At the same time Mak’s former lover Andy Flynn has a new job heading up a profiling team with the Australian Federal Police and is called in on a case involving a rapist whose methods have some similarities to those of the stiletto killer (the subject of a previous novel in the series). It’s really not a spoiler to indicate that Mak does make her way back to Oz for a combination of reunions and showdowns.

There are many things to like about this novel, not least of which is the fact that Mak Vanderwall is the very embodiment of a take-charge woman. Rather than lurching from one crisis to the next Mak decides to go on the offensive against those who have (or who would if they could) done her harm. Although she sometimes gets it wrong her actions are generally not of the ‘oh heavens, I can’t believe she did that‘ variety and it’s good to see a young-ish female character who is both stereotype-bending and very feminine (imagine!). Another element I liked is that there is a more sombre overtone to proceedings than might be imagined from the book’s marketing. This is not one of those fictional worlds where good routinely triumphs over evil. Even our heroine has moments that are truly morally ambiguous.

There are also things I didn’t like but, as mentioned, at least some of these are more to do with my personal taste than anything intrinsically wrong with the novel. Aside from struggling with the credibility of one woman experiencing so much murder and mayhem in her life I also found the body count high enough to put the book into pure fantasy territory for me (and fantasy and I are not good friends).  On a side note, because this is not the author’s fault, the audio narration grated. I know I downloaded it from an American website so perhaps this is to be expected but the constant mis-pronunciation of Australian place names and words (e.g. Canberra) set my teeth on edge.

Although clearly written for a mainstream audience this book doesn’t talk down to anyone (least of all its largely female readership) and offers a well-researched, fast paced adventure with a few thought provoking notions about the concept of justice. Moss is to be congratulated for writing an intelligent and entertaining romp and, perhaps more importantly, bringing her series to an exciting and fitting end while the quality is still there. I could (but won’t due to a rare attack of politeness) list a load of authors who need to learn that lesson.