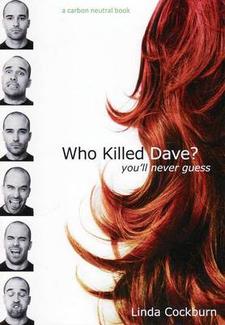 I will admit I only picked this book up because it was on the list of books nominated for best first fiction in this year’s Ned Kelly Awards (though I have no clue how this came to be as it was published in 2009). I had some vague notion a month or so ago that I’d read all of the nominated books but a few are proving hard to come by and two (so far) have not been worth finishing so that aim has fallen by the wayside. I was pretty wary of this one from the blurb and cover but it turned out to be an entertaining modern take on the classic whodunit. Who knew you’re not supposed to judge a book by its cover?

The residents of Kaos Court in suburban Australia don’t have much in common other than their collective hatred for Dave, the nastiest neighbour in the street. He digs up the ashes of a much-cherished pet and puts them on the compost heap, wipes mysterious fluids underneath the door handles of another neighbour, installs profanity on his roof as part of the Christmas lights celebrations and blackmails at least one resident. In due course he comes to a sticky end and it’s a rare character who only has one motive to have done the deed.

The person sharing this story with us is Robyn, a woman who I might have found annoyingly girlish but for the fact she has a sharp and somewhat self-deprecating sense of humour and is aware of her own behavioural flaws even if she can’t overcome them (a difficulty I can empathise with). A part-time masseuse and part-time tarot card reader she is the cul-de-sac’s fixer of problems which gets her into a whole lot of hot water. Her neighbours are a rag tag bunch of deliberate stereotypes that most readers will identify with from their own neighbourhoods and workplaces. Aside from Robyn’s own wannabe hippie boyfriend there’s a malicious gossip, a geek, a stuck-up cow, two recent immigrants from Africa and a couple of bogans. There’s also the blind, virgin phone sex-worker than no neighbourhood is complete without. Cockburn has fleshed out their characters well enough to make them very readable even if they are a bit familiar. It’s actually quite nice to see these archetypes with an Australian flavour instead of the English or American sensibility I am more used to seeing.

Plot-wise I found the first half of the book tighter and more engaging than the second half, which devolved into a bit too much contrived slapstick humour and kicked the romantic angle up a notch too far for my taste. Overall though I did enjoy the story and didn’t spot the twist-ending until the very last moment. One of the best aspects of the story was the way it provided a commentary upon the way events these days are shaped by their portrayal in the media. In the book a media frenzy develops when Dave’s rather horribly injured body is discovered and journalists clamour over each other to get exclusives with the various residents of of Kaos Court. Regardless of the impact on any official investigation, the death and series of events which follow it become fodder for the fictional (but only thinly disguised) ‘current affairs’ TV shows and it seems everyone in the country has an opinion about who did kill Dave that has little to do with the facts and lots to do with how the suspects have come across on television.

Who Killed Dave? is a light, funny book that does not take itself too seriously and has a real Australian flavour to it. Between the slapstick, the satire and the tropes of a classic whodunnit there is something for most readers to enjoy.

Who Killed Dave? is Linda Cockburn’s debut work of fiction, though she has published non-fiction on the subject of sustainable living. Linda blogs on an eclectic range of subjects at Living the Good Life. In evidence that she is the kind of environmental activist who practices what she preaches Linda has published the book through Together Press which promotes sustainable book printing.