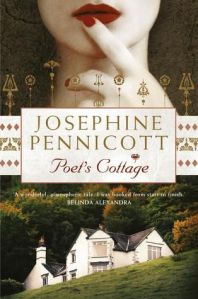 Newly divorced Sadie and her teenage daughter Betty move to the Tasmanian home Sadie inherited upon her mother’s recent death. Poet’s Cottage is in a small fishing village half a world away from the bustle of Sydney where the two have come from. It is Sadie’s mother’s childhood home and the place where Sadie’s grandmother, well-known children’s author Pearl Tatlow, died in suspicious circumstances in the 1930’s. As well as trying to build a new life for her small family Sadie is determined to write about Pearl Tatlow’s life and possibly her death, which leads her to start uncovering the hidden secrets of her family and the village.

Because these days it seems books must be labelled clearly with a single genre stamp POET’S COTTAGE has been marketed as a mystery. This is fine as far as it goes but I know several readers who would be turned off because they ‘never read crime fiction’. I’m sure they would enjoy this absorbing mixture of old-fashioned whodunnit, gothic romance and ghost story but they may never find out about it because they never venture into the crime shelves of their local book stores. Which is all a long winded way of me saying genre labelling does more harm than good (a complaint I have made before).

But I shouldn’t be grumbling when I have spent a most delightful afternoon escaping the worries of the world tucked up in my favourite reading chair in my own little cottage reading this very engaging novel. Pennicott, who earlier this year won her second Sisters in Crime Scarlet Stiletto Award for the best short story by an Australian woman crime writer, has created a marvellous cast of characters who play out something of a saga in a very evocative setting.

The past and present are cleverly linked here as one of the first people Sadie meets in the village is the elderly Birdie Pinkerton who was a friend of Pearl’s and married her widower husband some years after Pearl’s death. Birdie published the only book about Pearl Tatlow ever to have been written. Although she has read the book before Sadie is thrilled when Birdie gives her an unpublished version of the book that, she is promised, contains more details of Pearl’s life than has been generally known. Chapters from this manuscript are subsequently interspersed with the modern day narrative so we readers learn about the past events at the same time as Sadie.

There is a lot more going on here than just a whodunnit, as entertaining a puzzle as that is. One of the most intriguing elements for me was the exploration of the different ways in which a single person can be perceived by those around them. Pearl Tatlow is loved by one of her daughters (Sadie’s mother Marguerite) but despised by her other daughter (Thomasina who is still living nearby to Poet’s Cottage when Sadie and Betty arrive). She is adored by her husband, fawned over by several young men, reviled by the conservative women of the town and admired by Birdie and another young girl who find her exotic and beautiful. Who is the real Pearl Tatlow and which version of her did someone want to kill?

The gothic element of the story is provided in part by the setting – the house and the location which is as close to the haunted English moors as you will find in Australia – and partly by the dark romance of several threads. There’s not a great deal of happily ever after for the lovers of POET’S COTTAGE. Throw in a couple of secret tunnels and a ghost or two and you have all the necessary ingredients.

Both the present day and historical stories within POET”S COTTAGE offer intrigue in the form of the secrets people keep, either willingly or unconsciously, and Pennicott has woven them together into a great yarn.