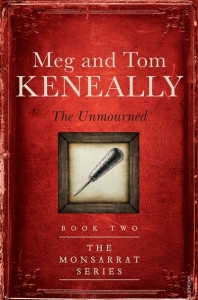 Robert Church is the man whose murder sets off the second adventure of Hugh Monsarrat, newly freed convict and clerk to the governor’s secretary in the still young colony of New South Wales, and the woman who is ostensibly his housekeeper but really his best friend, Hannah Mulrooney. As Superintendent of the Parramatta women’s prison (known as the Female Factory) Church took full advantage of his position’s power by starving, abusing and sexually assaulting the prisoners as well as siphoning off whatever he could to line his own pockets. Literally no one, not even his beleaguered wife, mourns his death and it would be easy for the case to be quickly dealt with if not for the fact that the prime suspect appears, at least to Monsarrat, to potentially be innocent. But everyone else, including his own boss, believes Grace O’Leary, an outspoken leader among the female convicts, guilty of the crime. Monsarrat, ably assisted by Mrs Mulrooney, has only a few days and a limited amount of official tolerance for his shenanigans, to conclude his investigation.

It is always with some trepidation I approach a book I am really hoping to like because, as happened last month, it can be disappointing. But Meg and Tom Keneally did not let me down with this second instalment of their historical crime series set in colonial Australia. Although I enjoyed this novel’s predecessor, last year’s THE SOLDIER’S CURSE, very much I thought this one even better. The story here is more complex and so ultimately a more satisfying tale to unravel. Given the murder victim’s reputation there is no shortage of suspects and even if they aren’t involved in the crime many of them have secrets they’d prefer to keep hidden. Trying to ascertain which of the many secrets provided a motivation for murder keeps our amateur sleuths, and this reader, guessing until the very end.

Even Mrs Mulrooney has something to hide and its revelation provides a turning point in her relationship with Monsarrat, though not in the way the person who reveals the secret anticipates. These two characters and their relationship – something of a surrogate mother/son one I suppose – is another highlight of the novel. Monsarrat is forced to confront his core beliefs as he comes against situations in which his own freedom, something he values very deeply, is threatened if he continues down a certain path. It’s not immediately obvious which choice he will make and it’s hard to blame someone for wanting to avoid a third foray into fairly brutal penal life so there is real tension in seeing this thread unfold over the course of the story. Mrs Mulrooney continues to grow in confidence as she writes her first letters to her son, thanks to Monsarrat’s teaching. Her observations about the difficulties involved in learning to read and write offer an excellent insight into her practical and astute character

“…I would have to say that the letters won’t behave themselves. They keep insisting on doing different things in different words. There is no logic to it, no organisation. If I ran a kitchen the way the English language runs itself, it would be in ruins.”

Despite these problems Mrs Mulrooney in turn becomes a writing teacher as well as a friend to some of the inhabitants of the Female Factory. What we learn of her personal history, including her connection to the events which occurred at Vinegar Hill in 1798 only endears her further to Monsarrat (and readers).

Once again the Keneally duo has wrapped a terrific story around a fascinating and credible depiction of life in Parramatta in 1825. The physical aspects of the setting are vividly brought to life as are the psychological and emotional elements that must surely eventuate in a place where most people are either criminals (or ex-criminals) or their captors. The power imbalances and opportunities for abuse and ill-treatment seem endless and it’s almost a miracle that some people, like Grace O’Leary, retain their humanity in the face of it all.

I can wholeheartedly recommend THE UNMOURNED to fans of historical crime fiction but would even suggest it to those who’ve not tried this sub genre before. The book has humour, a touch of romance, and intelligently explores our social and political history while introducing memorable characters and telling a ripper yarn. What more could you want?

This is book 4 I’ve read and reviewed for the sixth Australian Women Writers Challenge. For more information about the challenge check out my challenge progress, sign up yourself or browse the Challenge’s database of reviews.

3 thoughts on “Review: THE UNMOURNED by Meg Keneally and Tom Keneally”